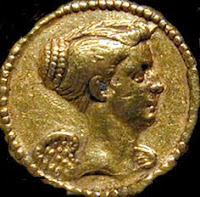 Fulvia, the daughter of M.Fulvius Bambalio and Sempronia Tuditani filia, played a significant and deliberate political motivated role in events particularly during the consulship (44 B.C.) of her husband Marcus Antonius and his brother Lucius Antonius’ struggle against C. Octavianus in the Perusine War (41-40 B.C.)

Fulvia, described by Octavianus’ mendacious and gross propaganda as domineering, jealous, impatient and war-mongering, appears to have been one of those high-spirited very influential and powerful Roman matrons like Servilia, the mother of M.Brutus and Caesar’s mistress.

(Quoting Syme’s rehabilitation: “Octavianus exaggerated the role of Fulvia at the time and later, putting her person and her acts in a hateful light; and there was nobody afterwards, from piety or even from perversity, to redeem her memory.”)

These formidable Roman ladies commanded political influence in their own right.
But however formidable a lady, Fulvia’s ability to act in political affairs was – due to the male-dominated political society - limited to influencing the men around her, more specifically her husbands. All three had active political careers, appear to have been rather close friends, and all three had supported Julius Caesar.

Fulvia married thrice, the first time c. 62-60 to P.Clodius Pulcher, tribune of the plebs in 58 B.C. whom she bore two children:
1.P.Clodius P.f.Ap.n.Ap.pron.Pulcher, quaestor, praetor,
augur, and
2.Clodia, who married C.Octavianus in 42, their marriage
never seems to have been consumated and ended in a
divorce in 41.

Clodius got killed near Bovillae in January 52 B.C. during
a skirmish with adherents of his political enemy Milo.

Her second husband, whom she married at least late in 52, was C.Scribonius Curio, trib.plebis 50 B.C. In an attempt to conquer Africa for Caesar he got killed by the forces of king Juba during the battle in the valley of Bagradas near Carthage in 49, and once again she became a widow. Their son C.Scribonius Curio was executed by order of Octavianus after the battle of Actium (31 B.C.)

Marriage number three was in 46 B.C. to Marcus Antonius,
III vir.r.p.c.
Out of this marriage were born the ill fated Antonius Antyllus and Iullus Antonius.
Antyllus, born in February/March 44 B.C. was strangled by order of Octavianus at Alexandria in 30 B.C.

Iullus was charged of having an adulterous affair with Julia, Augustus’ daughter, and executed in A.D.2. The real reason was more likely because of a conspiracy against Augustus’ rule.

Fulvia died in the 2e half of 40 B.C. at Cisyon in Macedonia, where she had fled to after the fall of Perusia in the spring of 40 B.C.

Nowhere in the ancient sources is a hint given of her age at anytime. However, contrary to the husband no variation attends upon the marriage age of the bride under the Republic or the Empire, fourteen or fifteen can be taken for normal in the upper order. While instances occur of twelve or thirteen, anything over sixteen will be regarded as exceptional.
Her first marriage was in c.62-60 which would make her date
of birth c.75 B.C., thus she would have been about 35
when she died.

She seems to have been the last of the Fulvii and the Sempronii Tuditani, both families of very old plebeian nobility who, as so many other noble families, were dying out by the end of the Republic.
Gepost door H.W.A.Smits op 19:32 Geen opmerkingen:

Sappho: Ode to a loved one.

LEST as the immortal gods is he,
The youth who fondly sits by thee,
And hears and sees thee, all the while,
Softly speaks and sweetly smile.

'Twas this deprived my soul of rest,
And raised such tumults in my breast;
For, while I gazed, in transport tossed,
My breath was gone, my voice was lost;

My bosom glowed; the subtle flame
Ran quick through all my vital frame;
O'er my dim eyes a darkness hung;
My ears with hollow murmurs rung;

In dewy damps my limbs were chilled;
My blood with gentle horrors thrilled:
My feeble pulse forgot to play;
I fainted, sunk, and died away.

Macrobius: Anecdotes about the Emperor Augustus

The most important of his works is the Saturnalia, containing an account of the discussions held at the house of Vettius Agorius Praetextatus (praetorian prefect from May 21 - Sept. 9, A.D. 384) during the holiday of the Saturnalia starting on December 17. It was written by the author for the benefit of his son Eustathius (or Eustachius)

I.Augustus replied to a prefect of cavalry who had been relieved of his command but nevertheless claimed a pension, saying that he made the request not for the sake of the money but that it might be thought that he had resigned his commission and had been adjudged worthy of the gift by the emperor, Augustus retorted:
” Tell everybody that you have had it. I shall not deny that I gave it.”

II.To an ugly hunchback named Galba, who was pleading in court before him and kept on saying:” If you have any fault to find, correct me,” he said:” I can offer you advice, but I certainly can’t correct you.”

III. A certain Vettius had ploughed up a memorial to his father, whereupon Augustus remarked:” This is indeed cultivating your father’s memory.”

IV. As a young man he neatly made fun of one Vatinius who had become crippled by gout but nevertheless wished it to be thought that he had got rid of the complaint. The man was boasting that he could walk a mile, “ I can well believe it,” said Augustus, “ the days are getting somewhat longer.”

V. An unkind quip made by a man from one of the provinces is well known. In appearance he closely resembled the emperor, and on his coming to Rome the likeness attracted general attention. Augustus sent for him and on seeing him said:
” Tell me, young man, was your mother ever in Rome?” “No”, replied the other and, not content to leave it at that, added:” But my father was- often.”

VI. During the triumvirate Augustus wrote some lampoons on Pollio, but Pollio only observed:” For my part I am saying nothing in reply; for it is asking for trouble to write against a man who can write you off.”

VII.As censor, too, Augustus showed a remarkable tolerance, which won him high praise. A Roman knight was being reprimanded by him on the ground that he had squandered his property but was able to show publicly that he had in fact increased it. The next charge brought against him was failure to comply with the marriage laws. To this he replied that he had a wife and three children and then added: ” I suggest, Sire, that in future, when you have occasion to inquire into the affairs of respectable persons, the inquiry be entrusted to respectable persons.”
Gepost door H.W.A.Smits op 19:03 Geen opmerkingen:

In 57 he received the toga virilis, was coopted into the college of augures, and adopted into the gens of the Manlii Torquati but never used that name.

Probably in about 53 B.C. he married Caecilia Metella, daughter of Q.Caecilius Metellus Celer, consul 60 B.C. and of the notorious Clodia, daughter of Ap.Claudius Pulcher, consul 79 B.C.

No doubt he accompanied his father to Greece in 49, but he was back in Italy in the summer of 45 where he divorced his wife on account of her adulterous affair with P.Dolabella. An affair which to Cicero’s fury - whose daughter had been married to Dolabella until 46 - had started in at least 47 B.C.

Approving Caesar’s murder, in which he falsely claimed to have taken part, he went to the East in 43 as quaestor to C.Trebonius, the proconsul of Asia 44-43 B.C., and after his chief’s murder at Smyrna (Izmir) in January 43 by P.Cornelius Dolabella, proconsul of Syria, he took over the administration of the province as pro quaestor pro praetore. During the years 43 and 42 he served under Cassius against Rhodes and was in command of Myra in Lycia under Brutus.

He seems to have been put to death after the battle of Philippi by Marcus Antonius and Octavianus in Oct./Nov. 42 B.C., probably because of his claiming a part in the murder of Caesar.

His own reports of his activities in the Aegean area survive in letters to Cicero and to the Senate (ad Fam.XII.14, 15)
Gepost door H.W.A.Smits op 18:49 Geen opmerkingen: