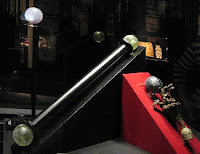 In December 2006 archeologists under direttore Clementina Panella, archeologist at the University of La Sapienza in Rome, made the find of their life.

During excavations on the North-eastern slope of the Palatine Hill they discovered in an underground storage space the remains of an antique wooden chest.

In it they found among other things: Imperial Roman standards (signa imperii), three sceptres; the most important find was a scepter of a flower holding a blue-green globe, which is believed to have belonged to the Emperor Maxentius himself because of its intricate worksmanship, metal javelin heads (pilum), two perfectly round spheres of gold and green coloured glass and one sphere made of azure-blue chalcedon. 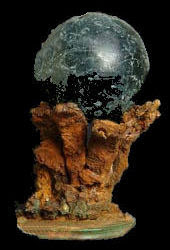 These objects are on unkown grounds ascribed to Maxentius’ reign (306-312), and are supposed to have been hastily hidden there on the eve of the battle of Milvian Bridge on October 28th 312 in which Constantine (the Great) defeated Maxentius.

These extraordinary finds are now on display in the Museo Nazionale Romano at the Palazzo Massimo in Rome.

C.Asinius Cn.f.Pollio the noted orator, poet, critic, and historian, was born in 76 B.C. and died in Tusculum in A.D.5.
He was the grandson of Herius Asinius of Teate, praetor of the Marrucini.

He had joined Caesar, and was with him when he crossed the Rubicon in January 49
(Julian calendar Nov.22, 50 B.C.), possibly as one of his legates. He then went to Africa with Curio, after whose defeat and death he crossed over to Greece, and fought on Caesar’s side at Pharsalus (48). In 47 he was chosen as one of the tribunes of the people. Having accompanied Caesar as legate in his African and Spanish campaigns (46-45), he returned with him to Rome.
As praetor 45 he was sent back as governor of Further Spain to resist Sex.Pompeius, and was there when Caesar was assassinated in 44.
When Lepidus and Octavian joined Antonius in 43, Pollio joined them. Antonius gave him the administration of Gallia Transpadane for the years 42-41, it was then that Pollio saved from confiscation the property of the poet Virgil.
In 40 Pollio became consul and assisted in the reconciliation between Antonius and young Caesar at Brundisium in September 40.
Both consuls abdicated shortly afterwards.Towards the end of the year or early in 39 he was sent by Antonius as proconsul to Macedonia to fight the Parthini, an Illyrian people, whom he defeated, and was rewarded with a triumph. The rest of his life he devoted to literature, and died at his Tusculan villa in AD 5, at the age of 80/81.
Gepost door H.W.A.Smits op 12:04 Geen opmerkingen:

These, my dearest Martialis, are
the things that bring a happy life:
wealth left to you, not laboured for;
rich land, an ever-glowing hearth;
no law, light business, and a quiet mind;
a healthy body, gentlemanly powers;
a wise simplicity, friends not unlike;
good company, a table without art;
nights carefree, yet no drunkenness;
a bed that’s modest, true, and yet not cold;
sleep that makes the hours of darkness brief:
the need to be yourself, and nothing more;
not fearing your last day, not wishing it.

When Caesar was selling by auction the property of certain citizens, Servilia, (the mother of Marcus Brutus) bought a valuable estate quite cheaply and so became the victim of a jest of Cicero’s, who said: ” Of course you will the better understand Servilia’s bargain if you realize that a third was knocked off the purchase price of the estate” (tertia deducta).

Note.
Servilia had a daughter, Junia Tertia (the wife of C.Cassius), whose favours- as well as her mother’s - the dictator was then, according to malicious gossip, enjoying.
The play upon the two meanings of deducere –“to deduct” and “to conduct a bride to her husband” can hardly be kept in English.
Gepost door H.W.A.Smits op 11:20 Geen opmerkingen: