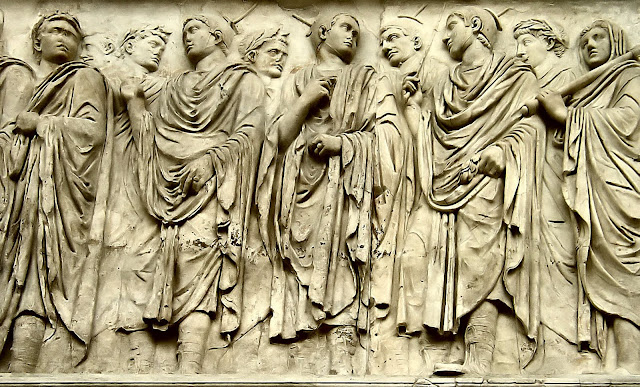 The ‘Ara Pacis Augustae’ (Peace Altar of August), built to commemorate Augustus’ victorious return from Spain and Gaul, stood in antiquity on the Via Flaminia (now the Via del Corso) under what is now the Palazzo Fiano on the corner of the Via in Lucina. Since 2006 the Ara is housed in an airy glass-and-concrete building beside the Tiber; the Museo dell'Ara Pacis, Lungotevere Augusta, Rome.

The lavish sculptural decoration of the Ara Pacis is among the finest examples of Roman art; reliefs representing the ceremonial procession at the altar's dedication are the first in Western art that can strictly be called documentary. The faces are no mere conventional masks, idealized beyond recognition. These are portraits from life and they still retain their freshness showing identifiable individuals in a contemporary event.

Augustus, in his ‘Res Gestae’ (My Deeds), written during the last years of his life says:
“On my return from Spain and Gaul in the consulship of Tiberius Nero and Publius Quintilius [13 BC] after successfully arranging affairs in those provinces, the senate resolved that an altar of the Augustan Peace should be consecrated next to the Campus Martius in honour of my return, and ordered that the magistrates and priests and Vestal virgins should perform an annual sacrifice there.”

The decree of the Senate authorizing the foundation of the Ara Pacis Augustae was passed on July 4, 13 B.C., and it was consecrated on the 30th of January 9 B.C.

Gather the roses in the morning

Ah, what sorts of roses have I seen bloom in the morning!
They were still being born and the age was not equal for all.
The first covering was leading clusters of berries shaped like buds,
the next lifted crimson peaks from a projecting stone,
the third had now revealed a whole circle of flower baskets,
the fourth likewise shined with the bud of a new flower.
While one lifts its head and the other unties a knot,
thus, while virgin modesty is unwrapped with clothing,
gather the roses in the morning lest they die:
quickly does a maiden grow old.

Plinius, better known as Pliny the Younger, was the adoptive-son of C.Plinius, praefectus classis, uncle on his mother’s side.

His father died at an early age before A.D.76; Pliny the Elder, writer of the encyclopaedical Naturalis Historia, helped raise and educate him and they were both witnesses to the eruption of Vesuvius on August 24, 79, the day of the elder's death.

After the death of Pliny the Elder the famous L.Verginius Rufus, of Mediolanum (Milan), consul III in 97, who had suppressed the revolt of Julius Vindex and refused the Imperial power, was appointed as guardian to Pliny the Younger, helped by two more consulars, Julius Frontinus, curator aquarum, and Corellius Rufus, cossuff.78, all family friends.

His career is rather normal:
Decemvir stlitibus iudicandis (presiding in the Centumviral Court, where he was to spend a great part of his public life)
Early in Domitian’s reign (82/83) he served as tribunus militum in the legion III Gallica in Syria under the leg. Aug. T.Atilius Rufus.
Quaestor Augusti 87 (89?) (these were regularly chosen (elected without contest) from the candidati Caesaris)
Tribunus plebis 91. Praetor 93 (in this year he first took part in a public prosecution, acting with Herennius Senecio for the people of Baetica when they successfully accused Baebius Massa of extortion)
Praefectus aerarium militare ca. 94-96.
Praef. aerarium Saturni 97-99 (the Chest and Record Office of the senatorial administration, appointed before the death of Nerva, and was continued in office by Trajan)
Consulsuffectus Sept.- Oct.100. Augur 103 or 104 (instead of Julius Frontinus;
Plinius was already flamen divi Titi at Vercellae)
Curator alvei Tiberis et riparum et cloacarum urbis 104-106 ? (consular curator of the Tiber banks and the city sewers)
Legatus Augusti pro praetore consulari potestate Bithynia and Pontus from Sept.110 or 111 till Febr. 112 or 113.
(Title is sign of transition from senatorial to imperial rule)

His first wife is unknown.
His second marriage was to the daughter of Pompeia Celerina (Celerina’s husband is unknown; Celerina – to whom Pliny gave his house in Alsium left to him by Verginius Rufus - was the daughter of L.Pompeius Vopiscus C.Catellius Celer, cossuff. 77)

Married 3. in ca.100-102 with Calpurnia, daughter of Calpurnius, son of L. Calpurnius Fabatus. eques from Comum, who had also a daughter, Calpurnia Hispulla, aunt of Plinius’ third wife.

Plinius is known for his hundreds of surviving letters which, carefully composed and arranged in a non chronological order as they are, miss the spontanious outspokenness of Cicero’s letters, but they are an invaluable historical source for the period. The first nine books contain 247 personal letters, the tenth book his official correspondence with Trajan (or his ab epistulis) from Bithynia. Also preserved is his Panegyricus, an in accordance with tradition thanksgiving and praising of Trajan for granting him the consulship.

Plinius was the somewhat condescending benefactor of the historian Suetonius for whom he arranged a small estate at a reasonable price.

Pliny the Younger probably died in A.D.112 or 113 in Bithynia, being the time that his correspondence with the Emperor Trajan suddenly stopped.

He is more than a hero

who listens intimately
to the sweet murmur of
your voice, the enticing

laughter that makes my own
heart beat fast. If I meet
you suddenly, I can't

speak — my tongue is broken;
a thin flame runs under
my skin; seeing nothing,

hearing only my own ears
drumming, I drip with sweat;
trembling shakes my body

and I turn paler than
dry grass. At such times
death isn't far from me.

In 58 B.C. he became by way of a testamentary adoption son and heir to Q.Caecilius, an uncle on his mother’s side, making his official designation, Q.Caecilius Pomponianus Attica.

“L.Lucullus (Ponticus), who married Servilia’s sister was not only the friend and benefactor but also the prospective heir of Atticus’ uncle Caecilius. History does not tell Lucullus reactions to the scandalous discovery in 58 that Caecilius had in fact left his millions (ca. 10 mill.) and name to his nephew instead of to his noble patron. Public reprobation of Caecilius’ duplicity was such that they dragged his body through the streets.” (Valerius Max. VII.8, 5)

On December 2th, 56 B.C. Atticus wedded a certain young lady named Pilia, who bore him in 51 a daughter, Caecilia Attica.

In 47 Atticus published his Annali containing the names of every curule magistrate of each year, the laws, peace treaties, wars, and the genealogies of famous countrymen. On request of Marcus Brutus he wrote a genealogy on the Junii Bruti including their magistracies and dates. On request of Claudius Marcellus he did the same for the Marcelli, ditto for Cornelius Scipio (Scipio Africanus minor, an Aemili by birth), Fabius Maximus and the Aemilii.

He was the life-long friend, and publisher of Cicero’s volumeminous work. Of their correspondency during many years only Cicero’s letters have come down to us, thanks to his secretary and freedman, Tiro.

When his friend was murdered in 43 by the triumviri he obviously bore no hard feelings toward those responsible for his friend’s death for he remained on friendly terms with his murderers for the rest of his life. So much so that in about 37 he gave his daughter in wedlock to Marcus Vipsanius Agrippa: friend, general, consul, future son-in-law, co-ruler and designated successor of Augustus.

Atticus’ adagium was: Tranquillitati serviebat (peace of mind).
During the Civil Wars and all the political feuds he stayed strictly neutral in each and every conflict and from time to time subsidized both sides indiscriminately.
He had however through his large fortune and many connections great indirect influence.

Atticus owned a house on the Quirinalis built by Tamphilus, which was left to him by his uncle. Furthermore, since 68, an estate in Epirus near Buthrotum on the coast opposite Corfu. Also properties at Arretium and Nomentum.

Atticus died on March 31th, 32 B.C., three months after his 77th birthday.
Attended on his deathbed were his son-in-law Agrippa, L.Cornelius Balbus, and Sex.Peducaeus.

He was buried in the tomb of his uncle on mothers
side, Q.Caecilius, on the Via Appia
near the 5e mile stone.
Gepost door H.W.A.Smits op 13:46 Geen opmerkingen: